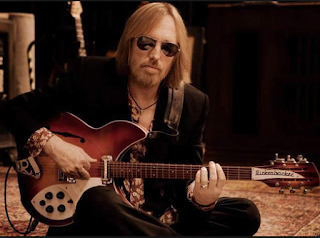 Tom Petty died last night. He was a poet, a performer, and without knowing it, a provider of the strength  we needed to stand up to the gates of hell and not back down.

It is hard to tell which is worse, the fear of chemo or actually doing chemo. It turns out that years later, if you survive your cancer, chemo will stay with you forever. But you have to do it if you want to live. That is what I was told. I am grateful for the poison that killed off as many runaway cancer cells that it could find.

The first time I did chemotherapy I was so scared. I sat in the waiting room waiting to be taken in for my treatment and worked myself up into such anxiety that I got up to leave the waiting room. The oncologist's receptionist had to stop me. She tried to calm me. They put me in an exam room that was harder to escape from and my oncologist came in to tell me I had nothing to worry about.

When they walked me into the room of beige Barco Loungers occupied by fellow patients, it dawned on me that if I sat in that chair it  really made me one of them -  a cancer patient. I didn't want to be a cancer patient! Maybe the tests were wrong and there has been some horrible mistake. (I still wait for that call in my dreams.)  I should be at lunch somewhere or on a beach or ironing - anything but becoming an official cancer patient with chemotherapy being pumped into my blood.

The needle went in and the drip started. The bag had every warning you can imaging on it: "Avoid Contact"- "Hazardous Material" - "Wear Gloves" and they were putting it directly into my vein. At first I thought I would get sick immediately, right there in the chair. But that didn't happen. It happened when I got home. Please note: This was in 2001/2002 and was before the invention of many of the anti-nausea drugs they have available today.  But, back then, I would drive myself home and get ready for three days of hell. Unrelenting hell. I had to do it for the next 6 months.

The second time I got breast cancer, in the opposite breast, I had a year of chemo. The drugs were better then to help ease the side effects - the immediate side effects. Cardio-toxicity is one that cannot be avoided with some chemotherapy drugs. Neuropathy, memory loss, vertigo, loss of fertility, weight gain, high cholesterol and sudden menopause, are just some of the other side effects that will last forever. Your hair does grow back. Eventually.  For me, so far, the number one side effect of the nine different chemotherapy drugs I did has been that they worked and I am glad I did them.

As bad as my first chemo experience was, when the cancer made its second appearance, I was mad and ready to fight it. I was furious it came back. I wanted my oncologist to give me everything he had. And I had Tom Petty by my side.

"You can stand me up to the gates of hell and I won't back down."

Back at No Surrender, the NS women were in all phases of treatment and we supported each other cheering them on, giving them strength and pushing them to not back down. Tom gave us our soundtrack.  He was speaking what we were thinking, "You don't know what it means to be me."

We gained so much power thanks to his music. We will still encourage all of the newly diagnosed to not back down.

Thank you, Tom. From all of us.