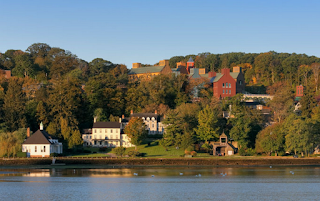 We have long been strong supporters of the work being done at the Cold Spring Harbor Laboratory. Today, an article that appeared in Long Island's Newsday, shows that there is much to hope for.


When the director of research at Cold Spring Harbor Laboratory examined his first specimen of cells treated with an experimental breast cancer therapeutic, he was stunned.

David Spector is a seasoned scientist long used to groundbreaking results and he went into the project with a strong hypothesis. Yet, he didn’t quite know what to expect.

He is exploring a treatment strategy called “antisense technology” and the outcome of his first test proved so spectacular that it served as one of those rare Eureka moments when a result surprises even a veteran investigator.

“I didn’t expect it,” said Spector, enthused that a scientific endeavor can still be marked by the unexpected. “We were hopeful that something would come out of it. Of course, we didn’t know how dramatic the effect would be.”

Aggressive cancer cells, which had overwhelmed the specimen, were no longer visible once exposed to the novel therapy. To Spector’s surprise, the cells had undergone a substantial character change, becoming large fluid-filled and static having lost 70 percent their ability to mobilize as metastatic tumor cells. He and his team have repeated the experiments countless times, and have subdued cancerous cells with each effort.


Antisense technology involves the identification of aberrant RNA — a cousin to life’s commander molecule — that can persist at the core of some cancers.

Then, it involves synthesizing a deactivating sequence — an antisense strand — that binds to the renegade RNA to trigger its destruction.

The implications of the findings are enormous, Spector said, given the seriousness of this form of breast cancer — advanced disease that spreads.

If the war on cancer nearly a half century ago relied largely on “slash, burn and poison” as methods to fight cancer through surgery, radiation and chemotherapy, then evolving efforts designed to conquer the disease will have to venture deeper into uncharted regions of the cancer cell, mainly its inner sanctum — the nucleus — where DNA and RNA reside, scientists say.

Spector’s form of research is the kind that some experts say will be needed if there is to be a genuine “moonshot” effort to defeat all cancers, a challenge issued by President Barack Obama in his final state of the union address last month.

Advanced breast cancer is a significant public health concern, according to the Metastatic Breast Cancer Network, an advocacy organization for patients, which estimates that 6 percent to 10 percent of breast cancer cases are Stage IV and metastatic at the time of initial diagnosis.

Yet, others are at risk as well — patients whose cancers are resistant to standard treatments and those whose disease inexplicably rebounds after remission. Patients are watching anxiously as Spector’s research progresses.

“This is very important work, very important for us, ” said Joanne Marquardt of West Islip, an 11-year breast cancer survivor. She describes the potential for metastatic disease as the shadow that haunts some women — and men — years after successful treatment.

To date, Spector’s research has mostly involved mouse mammary cells. And while he underscores the preliminary nature of his experiments, Spector is well aware that he has embarked on compelling scientific terrain. Experts outside his lab are also excited about the approach. Ionis Pharmaceuticals, a Southern California company, has already joined the effort to develop Spector’s antisense concept into a treatment for metastatic breast cancer.

Human clinical trials are expected within the next 18 months, said Frank Bennett, vice president of research at Ionis.

Spector and postdoctoral fellow, Gayatri Arun, the lead associate in the lab, journeyed into the nucleus of cells to target an engine of cancer development: the mystifying molecular segments that scientists call long non-coding RNA. These sequences were once called junk RNA.

Investigators now know they are hardly junk and probably play active roles in other forms of cancer as well as disorders that have no relationship to malignancies.

“There is no junk RNA,” but there are some RNAs, Bennett noted, whose function remains a mystery. His company also studies non-coding RNAs and develops antisense therapeutics for a wide range of medical conditions.

Like DNA, RNA is a nucleic acid and each is governed by a special alphabet, the letters of life.
For DNA those letters are A,T, C and G. RNA’s alphabet is A, U, C, and G. Each letter represents the name of a nucleic acid, the basic building blocks of genes, which spell the code for a specific protein. DNA, a double-stranded spiraling helix, carries the blueprint for proteins. RNA, a single stranded molecule, is involved in transcribing DNA’s code.

As it turns out, some forms of RNA — non-coding RNAs — are not involved in transcription. For years, long non-coding RNA remained woefully understudied, persisting as a bewildering chapter in the story of genetics. But work, such as Spector’s and a growing number of other scientists has begun to shed light on this dark matter of the genome.

Long non-coding RNA may underlie some forms of lung cancer, studies have shown, as well as certain types of heart disease, particularly cardiac fibrosis, a condition marked by abnormal thickening of the heart’s valves.

Spector has targeted a long non-coding sequence of RNA called Malat1, which has played an underappreciated role in aggressive breast cancer. Spector and his team found Malat1 to be overabundant in tumor cells of those diagnosed with the disease.

“In the past, when scientists were looking for targets to treat cancer, the hunt for the most part, had been among the proteins. Very little work had been directed toward these other RNAs,” Spector said.

“This is a remarkable class to target because we can attack them in ways that are different from the way we target proteins.”

“In terms of RNA,” Spector said, “we are basically talking about sequences of letters.”

For example, if the long-noncoding RNA target sequence is A, G, C, U, Spector said of RNA’s alphabet, then the “antisense” sequence to quell it would be A, G, C, T, borrowing from DNA’s lexicon.

Malat1 is dozens upon dozens of letters long, but when only 16 to 20 antisense molecules bind to it, an enzyme is automatically recruited by the cell that destroys the entire stretch of cancer-causing Malat1.

The reason is explained by evolution: Double-stranded RNA is alien, even to a cancer cell. That is why the enzyme quickly assembles — to destroy any inkling of a double-stranded RNA. Tumor proliferation is halted when Malat1 is destroyed.

Spector credits the vast Human Genome Project with opening new windows of understanding into hidden regions of the genome. Sixteen years after the project’s end, discoveries about poorly understood forms of RNA are still paying dividends, he said.

His antisense approach was well under way when Obama called for a “moonshot” effort to conquer cancer.

The American Cancer Society is welcoming the presidential challenge noting that innovative approaches that are off the beaten path can help spur a new understanding of the processes driving tumors.

“Cancer will not be cured this year,” said Dr. Otis Brawley, an oncologist and chief medical officer for the cancer society “but we should do all we can to ensure 2016 is remembered as the year we came together in an effort to work smartly.

“It is imperative,” he said, “that we continue to fund the brightest minds.”

In West Islip, Marquardt, a research advocate with the West Islip Breast Cancer Coalition, views Spector among the brightest minds. She is excited about the prospects of his antisense therapy moving into a clinical trial.

“From what I have read of his work, this approach,” she said, “goes a long way in dealing with the problem of metastasis.”

Marquardt, who serves as a consumer reviewer of studies up for grants awarded by the Department of Defense’s breast cancer research program, read Spector’s antisense research paper not for funding, but for her own edification.

Marquardt hails from a family that has been stalked by the disease over multiple generations. Her grandmother had breast cancer as did her mother and aunt and now her daughter.
She said metastatic breast cancer is much tougher to treat.

“The fear that it can come back, that the other shoe is going to drop, is something we live with,” said Marquardt, a retired biology and Earth science teacher.

Spector’s innovative approach to dramatically slow and possibly stop the disease, she said, fuels the hope of survivors worldwide.
Posted by Gina Maisano at 8:25 PM No comments: