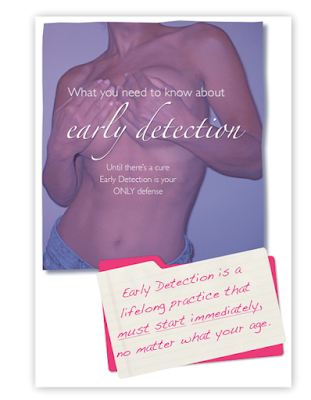 From the inception of the No Surrender Breast Cancer Foundation, we have stressed the importance of early detection. Some people are very lucky and find their tumors while they can be removed and the rest of the body can be treated depending on the extent of the disease. Does that mean that all small tumors are not deadly? No.

My first breast cancer's pathology revealed it began as DCIS, meaning it was contained within the milk duct. But it broke through the duct and became invasive. Invasive triple negative breast cancer. Because of this I had to do chemotherapy and radiation. That was in 2001. Over the next few years I met some wonderful women through my foundation. One young woman became a dear friend. Her name was Ferne Dixon. Her picture is on the right of this blog and always will be in eternal memory. She had triple negative breast cancer, too. But she did not get screened early and because of this the tumor was found after it became quite invasive.

Like Ferne, young, black women are at a higher risk of developing triple negative breast cancer while they are in their 30s. If they wait to be screened until they are 40 - or now as the new guidelines suggest 50 -  it will be too late. I promised Ferne as she was dying of this horrible disease, that I would do everything in my power to spread the word about the importance of early screening so young women would have a chance to become old women and not die of a disease that could have been treated and possibly overcome.

Now, after an exhaustive study, the experts are stating that early detection does, indeed, prolong life.
They have proof. It can be found here.

What the study shows is that the smaller the tumor, the longer the survival. The more lymph nodes involved and the larger the tumor the long term survival is not as favorable.

With new targeted treatments and the effectiveness of hormonal medications, even women with a more advanced disease are living longer. This applies only to women who are responsive to endocrine therapy.

My second cancer was estrogen receptor positive and it was large and involved the lymph nodes. Reading the graph is frightening knowing my pathology. But I am glad I did a year of strong chemo and had extensive radiation and am taking Femara. At least I am fighting it. What about the women who haven't been screened so they do not know they have to fight?

As everyone knows, we are firmly anti-pink at No Surrender. Sometimes that message is misunderstood to mean that we are anti-early detection. That has never, ever been the case. Look at our program The Before Forty Initiative - here - and you will see how strongly we believe in screening.  This screening is not just mammograms, which can miss some tumors. We encourage fighting for ultrasounds and breast MRI's - particularly for young women with dense breast tissue.

If you do anything in this pink month, set the record straight. Opposing pink greed is not opposing being smart and taking care of yourself and the ones you love. If you would like to start a Before Forty Initiative Outreach in your area, please contact us. We travel everywhere we can find women who don't know of their risks. We have made a difference. Tumors have been found in young women. And every time I am thanked by them or their mom or grandmother, I think of Ferne. I know she is smiling and telling me, "Keep it up, girl."

Before Forty Initiative: http://nosurrenderbreastcancerhelp.org/About/B440/Before40.html
Posted by Gina Maisano at 5:43 PM