Attention Needs To Be Paid to Dr. Watson

Back in the '90s I had the privilege of meeting Dr. Watson and his lovely wife who were honorees for a fundraiser I was organizing. I did a lot of research on Dr. Watson's work. Little did I know at the time that his work would be such an important part of my survival.

Not one to shy away from the glaring light of truth, he has once again stepped forward with what I believe is evidence based, spot on commentary regarding the "war on cancer" and why we are not winning it.

This article appeared today in Reuters.

"The biggest obstacle" to a true war against cancer, Watson wrote, may be "the inherently conservative nature of today's cancer research establishments." As long as that's so, "curing cancer will always be 10 or 20 years away." 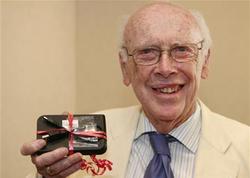 NEW YORK (Reuters) - A day after an exhaustive national report on cancer found the United States is making only slow progress against the disease, one of the country's most iconic - and iconoclastic - scientists weighed in on "the war against cancer." And he does not like what he sees.

James Watson, co-discoverer of the double helix structure of DNA, lit into targets large and small. On government officials who oversee cancer research, he wrote in a paper published on Tuesday in the journal Open Biology, "We now have no general of influence, much less power ... leading our country's War on Cancer."

On the $100 million U.S. project to determine the DNA changes that drive nine forms of cancer: It is "not likely to produce the truly breakthrough drugs that we now so desperately need," Watson argued. On the idea that antioxidants such as those in colorful berries fight cancer: "The time has come to seriously ask whether antioxidant use much more likely causes than prevents cancer."

That Watson's impassioned plea came on the heels of the annual cancer report was coincidental. He worked on the paper for months, and it represents the culmination of decades of thinking about the subject. Watson, 84, taught a course on cancer at Harvard University in 1959, three years before he shared the Nobel Prize in medicine for his role in discovering the double helix, which opened the door to understanding the role of genetics in disease.

Other cancer luminaries gave Watson's paper mixed reviews.
"There are a lot of interesting ideas in it, some of them sustainable by existing evidence, others that simply conflict with well-documented findings," said one eminent cancer biologist who asked not to be identified so as not to offend Watson. "As is often the case, he's stirring the pot, most likely in a very productive way."

There is wide agreement, however, that current approaches are not yielding the progress they promised. Much of the decline in cancer mortality in the United States, for instance, reflects the fact that fewer people are smoking, not the benefits of clever new therapies.

GENETIC HOPES
"The great hope of the modern targeted approach was that with DNA sequencing we would be able to find what specific genes, when mutated, caused each cancer," said molecular biologist Mark Ptashne of Memorial Sloan-Kettering Cancer Center in New York. The next step was to design a drug to block the runaway proliferation the mutation caused.

But almost none of the resulting treatments cures cancer. "These new therapies work for just a few months," Watson told Reuters in a rare interview. "And we have nothing for major cancers such as the lung, colon and breast that have become metastatic."


The main reason drugs that target genetic glitches are not cures is that cancer cells have a work-around. If one biochemical pathway to growth and proliferation is blocked by a drug such as AstraZeneca's Iressa or Genentech's Tarceva for non-small-cell lung cancer, said cancer biologist Robert Weinberg of MIT, the cancer cells activate a different, equally effective pathway.

That is why Watson advocates a different approach: targeting features that all cancer cells, especially those in metastatic cancers, have in common.


One such commonality is oxygen radicals. Those forms of oxygen rip apart other components of cells, such as DNA. That is why antioxidants, which have become near-ubiquitous additives in grocery foods from snack bars to soda, are thought to be healthful: they mop up damaging oxygen radicals.

That simple picture becomes more complicated, however, once cancer is present. Radiation therapy and many chemotherapies kill cancer cells by generating oxygen radicals, which trigger cell suicide. If a cancer patient is binging on berries and other antioxidants, it can actually keep therapies from working, Watson proposed.

"Everyone thought antioxidants were great," he said. "But I'm saying they can prevent us from killing cancer cells."

'ANTI-ANTIOXIDANTS'
Research backs him up. A number of studies have shown that taking antioxidants such as vitamin E do not reduce the risk of cancer but can actually increase it, and can even shorten life. But drugs that block antioxidants - "anti-antioxidants" - might make even existing cancer drugs more effective.
Anything that keeps cancer cells full of oxygen radicals "is likely an important component of any effective treatment," said cancer biologist Robert Benezra of Sloan-Kettering.

Watson's anti-antioxidant stance includes one historical irony. The first high-profile proponent of eating lots of antioxidants (specifically, vitamin C) was biochemist Linus Pauling, who died in 1994 at age 93. Watson and his lab mate, Francis Crick, famously beat Pauling to the discovery of the double helix in 1953.

One elusive but promising target, Watson said, is a protein in cells called Myc. It controls more than 1,000 other molecules inside cells, including many involved in cancer. Studies suggest that turning off Myc causes cancer cells to self-destruct in a process called apoptosis.


"The notion that targeting Myc will cure cancer has been around for a long time," said cancer biologist Hans-Guido Wendel of Sloan-Kettering. "Blocking production of Myc is an interesting line of investigation. I think there's promise in that."

Targeting Myc, however, has been a backwater of drug development. "Personalized medicine" that targets a patient's specific cancer-causing mutation attracts the lion's share of research dollars.
"The biggest obstacle" to a true war against cancer, Watson wrote, may be "the inherently conservative nature of today's cancer research establishments." As long as that's so, "curing cancer will always be 10 or 20 years away."