Recent studies have revealed that:

•    Less than a quarter (23 percent) of women know the wide range of breast reconstruction options available.

•    Only 22 percent of women are familiar with the quality of outcomes that can be expected.


"We want to bring the topic of breast reconstruction into the larger breast cancer dialogue," said ASPS President Malcolm Z. Roth, MD. "Letting women know their reconstruction options before or at the time of diagnosis is critically important to improving life after breast cancer. BRA Day USA is all about inspiring women who are on the road to recovery to a full life beyond breast cancer."

This year, the U.S. and more than 20 other countries will join an international effort to close the loop on breast cancer, to ensure that all patients are fully informed of their surgical options and supported by a team of medical professionals working together for the patient's best interest. Here in the U.S., supporters and survivors are planning more than 80 BRA Day USA events across the country in cities including New York, Chicago, Miami and Los Angeles.

The No Surrender Breast Cancer Foundation is a proud participant in these events.

Two Chances to Chat!
Gina Maisano, founder of the No Surrender Breast Cancer Foundation and author of “Intimacy After Breast Cancer” will be chatting live on Twitter and Facebook with two world renowned breast reconstruction surgeons:


Grammy award winning recording artist Jewel has written a very special song about breast reconstruction. She is the ambassador of BraDay USA.

7 out of 10 Women are Not Informed of Reconstruction Options

And the American Society of Plastic Surgeons is working hard to make sure that every woman is aware of her choices!

The No Surrender Breast Cancer Foundation is  proud to be a part of Breast Reconstruction Awareness Day, which is October 17th, across the country. 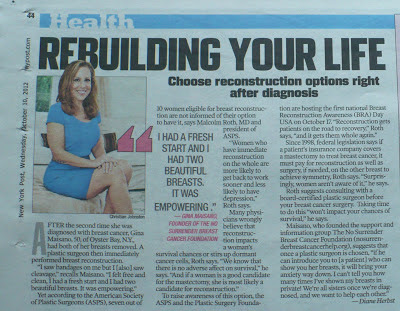 A scared young woman is diagnosed with a deadly form of breast cancer that no one knows a thing about at the time. They don't even have a name for it. They do now, it is referred to as Triple Negative Breast Cancer.

She doesn't know anyone (living) with breast cancer and has no support to speak of. She's single, lives alone, and feels truly alone for the first time in her life. She has a computer. She never really used the internet before but takes a dip into the cyberpool. Poking around she first finds the most horrifying statistics including how soon she should expect to die. She wanted people. She wanted a woman who had been through everything her doctors are telling her she has to do in order to attempt to survive this thing.

She finds a small group of women on a support forum that is part of a large network. At the time, these women were reeling over the loss of one of their beloved members. All she reads are posts about how much they miss her and how terribly painful their friend's death was. It was terrifying.  She wanted to run for the hills, but she had already posted a "I'm New, Can Someone Help Me?" post before reading about their friend.

In the sadness and fear, through tears and pain, a woman from Texas answered her. Then another, this time from Ohio. Then a woman from Florida joined in, followed by a Virginian. They all reached out a cyber hand to this true newbie -- me. They got me through everything. And I mean everything:  From severe radiation burns  to helping me cope with the three days of hell after chemo when I would have to literally sleep on the bathroom floor because I was so violently ill. I swore I would quit chemo each time, but they always managed to talk me back into going for my next infusion. They became my mother, my sister, my best friend and my coach.

Time passed and I started helping others too and the circle grew. New women, just like me joined... then some of the  members who initially held my hand died. The website that hosted the forum fell apart so they started a new group elsewhere. It wasn't the same. But I still went. It was the first place I opened my computer to each morning and the last place I closed my computer to each night. I branched out and found another large breast cancer support site. This was like going from a mom and pop hardware store to the Home Depot. It was hard to get around so I picked a spot and started from there. I went to the newly diagnosed section and helped a group of women who all started chemo together.

Once I got comfortable I spread out to other sections and fell in love with so many of my sisters. We shared everything. We held each other up through good times and bad. When the moderating of that site got a little shaky, we congregated in a mythical mountainside camp in our covered wagons sharing our lives. It was beautiful. The women there were and are beautiful. I got diagnosed a second time and they were all there for me.  We also started to lose friends, sometimes many in a very short time span. Eventually that website had its own growing problems and it was time to move on.

This time I started a new support forum. It is connected to a comprehensive site that helps women from all over the world understand their disease and by extension, gain the strength they need to conquer their fears.

That never would  have happened if that sassy lady from Texas and the other ladies on that first site hadn't reached out and taught me that it's not about me. It's about who's next and what can we do to make her journey better. I changed my life to accommodate that philosophy and have been incredibly enriched by it.

I have women friends all over the world now. I also have an amazing group of guardian angels who left too soon. I. Don't. Want. Anymore. Guardian. Angels. I want my friends to stay right here on earth. Together we can flood the world with our strength and love so much so that cancer literally drowns in it and we all swim to the top, free from it at last.

Until there's a cure, we are all we've got. No one else gets it like we do. I know this because late one September night in 2001 I got an email from Texas that said,  "Hey! I know we seem a little down right now. But don't run away. Tell me about yourself. We can help you. Stick around, darlin."  I stuck around and an entire new world opened up for me. I thank God for you my sisters. You lift me up each and every day. You are my heart and my courage and when a "civilian" asks me, "Why do you stay in the breast cancer world? Why don't you move on?" I think of all of you and I think of our angels and quietly shake my head wishing I could explain to her: You just don't understand. I hope there never is a day that you have to understand... but if you do, you'll feel a lot of emotions. The one you don't expect is the love. And that is what gets you through it and why you stay.