Betty Ford, The Woman Who Changed Everything 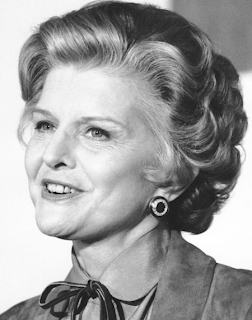 Former First Lady, Betty Ford has died at the age of 93. She was an incredible woman who triumphed over  cancer and addiction. We owe her a great deal of both thanks and respect.

In 1974, just a month after her husband suddenly became president, she discovered she had breast cancer. She underwent a mastectomy and did not hide it. As a result, she took the whisper out of the words, "breast cancer." She was our first, true advocate. Because of her example, other high profile women opened up about their own personal battles. Barbara Bel Geddes had a radical mastectomy around the same time as Mrs. Ford and made sure it was included in the storyline of her hit television show, Dallas. We all watched as Miss Ellie fought her cancer and her emotions about her body image and whether her husband would still desire her. This had never been seen or discussed before.

All of this led to empowering women to speak with their doctors about getting screened themselves, a topic that was not as  open as it is today. The birth  of the breast cancer advocacy movement can be traced to Mrs. Ford and Ms. Bel Geddes. Soon, radical mastectomies were stopped and less drastic and deforming surgeries were perfected leading to the beautiful reconstructive surgery available today.

Mrs. Ford did not keep anything secret for long. She was also an alcoholic. After she overcame her addiction, reached out to those who needed to break the bonds of substance abuse. The Betty Ford Clinic is famous for the work it does and the lives it has changed... all because Mrs. Ford wanted to help others yet again.

She may not have been flashy or known for her designer outfits. She was soft spoken and stood by her best friend, her husband, through good and bad times as he stood by her through her struggles. Quietly, without looking for credit, she went beyond herself to help others conquer what she had endured before them.

A quite warrior who won many wars, she was the friend you didn't realize you had. Who among us has not in some way been touched by breast cancer or substance abuse? Because of Mrs. Ford, there is no shame or embarrassment anymore. Courage, dignity and the knowledge that you can fight any battle is her legacy to us. We are incredibly lucky she was there for us. May she rest in peace.

What an inspiring woman, love you !