More Proof of the Need for our Before Forty Initiative 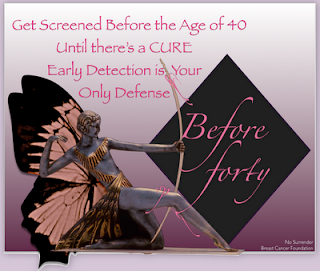 We have asked for support in spreading awareness of our Before Forty Initiative for  a long time now. Time and again we have offered evidence based documentation backing up our cause. The following is another addition to this.

Please consider helping us save the lives of young, African American women.

Black women had higher death rates, no matter what kind of breast cancer they developed

FRIDAY, Jan. 14 (HealthDay News) -- In an ongoing effort to shed light on the reason for racial disparities in breast cancer prognosis, researchers in North Carolina report new findings from their research on black women and breast cancer.

In this new study, researchers analyzed tissue from 518 black women and 631 white women with invasive breast cancer who were enrolled in the Carolina Breast Cancer Study.

The data suggest that it may not be possible to "identify a truly good prognosis subtype [of breast cancer] in African-American women and we need to find out why," study co-author Dr. Lisa Carey said in the news release.

The study was published in a recent issue of the journal Clinical Cancer Research.
Posted by Gina Maisano at 10:29 AM