Got Hope? TNBC Patients do now!

The Reviews Are in:
Blockbuster drug known as PARP = A future of hope

"I believe that in the next two to three years, PARP inhibitors will do for triple-negative breast cancer what trastuzumab [Herceptin] did for HER2 breast cancer." Jenny Chang, Baylor


"This development may have the potential to change patient survival . . . and appears to potentially change the natural history of at least a subclass of metastatic breast cancer [TNBC]" Clifford Hudis, MSK


“When you go home, be excited. Be really excited about this. Tell your patients there is reason to be hopeful.” Eric Winer, Dana Farber


Until now, the treatment for triple negative breast cancer has been limited. The options for metastatic patients were few and far between. Until now. The first completed studies of PARP, have shown that not only does it slow progression of disease, but patients are experiencing a complete response to the drug.

The side effects of PARP are generally well tolerated and do not include hair loss.

Where once there was no hope, no magic drug for triple negative patients, PARP is proving itself to be, as Dr. Jenny Chang, of the Baylor School of Medicine said, “What Herceptin did for HER2 breast cancer.”

“Many experts have argued that it is not possible to change survival in stage IV breast cancer. Certainly now there evidence for an alternative viewpoint; that with the use of very effective drugs, we can change overall survival, and we should aim for that." Clifford Hudis, MSK 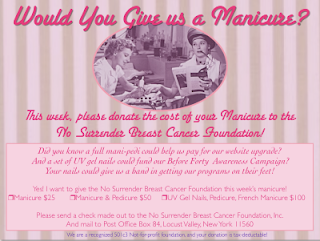 Click on Picture for Full Size
Would you like to give us a hand? How about both hands and maybe your feet, too? We need to raise money for website upgrades and to get our awareness campaign rolling for the Before Forty Initiative.
Well, the cost of a manicure and pedicure could help! And if you get UV gel nails followed by a pedi and you get a French manicure on top of that? Wow- we could print the pamphlets for the doctor's offices!

Please consider donating this week's mani-pedi to the No Surrender Breast Cancer Foundation...

We promise you will feel great!

Thank you.
Posted by Gina Maisano at 7:41 PM No comments:

True Warrior on Our Side 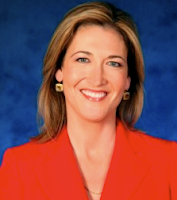 Anyone who has ever watched Fox News knows who Jennifer Griffin is. She is the fearless reporter in the war zone dodging incoming fire to get the story. She can be found interviewing Benjamin Netanayhu and the leaders of Hammas.  She was instrumental in securing the release of  her fellow journalist Steve Centanni and his colleague Olaf Wiig from their kidnappers in Gaza. And when she is not wearing a flack jacket and helmet, her presence on camera is one of lovely grace. I might add here that I have always admired her earrings.  The girl's got style.

Five months ago, Jennifer discovered a large tumor in her breast. It was breast cancer. That is bad enough to hear for anyone. But then she heard that she had "the bad one," triple negative breast cancer. As a survivor of TNBC, I know what a shock that little tidbit added on to a terrifying diagnosis is like. But it appears that Jennifer is approaching this with the same grit and determination she uses in her professional life. She is fighting like hell.

I saw her on television last night and reached out to a friend to get in contact with her. Because if anyone embodies the No Surrender spirit it is Jennifer. She is working out during her chemo and eating right. She isn't schlepping around  - she gets dressed and looks great, with an awesome collection of wigs. And I hope she is wearing those earrings of hers...

She is also fighting for women who have TNBC. We need voices like hers to help all of us. The more women we can educate about triple negative the better. That is what our Before Forty Initiative is all about.

I am glad to have Jennifer on our side. If anyone can get researchers to work harder and focus more on TNBC, it is her.

You can follow her journey on her blog: http://jengriffinblog.blogspot.com/

And Jennifer, from all of us here, we wish you the best in your fight- No Surrender!!!
Posted by Gina Maisano at 3:46 PM No comments:

Three years ago today I was told I had cancer, again. It was a different feeling from the first time. The first time was filled with hollow panic and the noise of fear... trying to understand what was happening to me, not knowing what they were going to do to me, what does a "poorer prognosis because of estrogen negative" mean?

The second time I had only silence. I knew what was ahead. I knew what I had to do. I didn't know how "bad" or "good" this new cancer was, but I knew I was mad as hell. It turned out to be a pretty big deal requiring bilateral mastectomy, nine months of chemotherapy, radiation, reconstruction, endocrine therapy and so much more. But I got through it, again.

In September I will reach the nine year mark of my first diagnosis, the "bad" one. Today is the third year mark of Round Two. From what I can tell, at this very moment, NED is still with me, and we are still dancing.

I am so happy just to dance with you, NED.

Posted by Gina Maisano at 11:30 AM No comments: