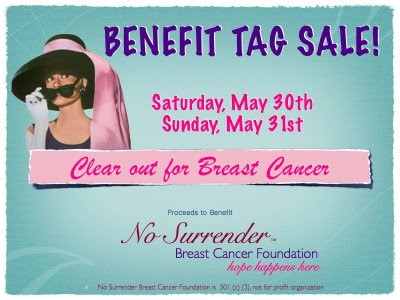 The No Surrender Breast Cancer Foundation is sponsoring a Nationwide Tagsale to benefit our 501 (c) (3) Not-for-Profit Foundation.
We will help you host your tag sale by providing you with copy-ready signs and flyers and even press releases for your local papers.
The percentage of your sales will help us reach more women across the world through our website and message forum and will add to our No Surrender Breast Cancer Research fund.
We hope you will Clear Out for Breast Cancer and help us grow!
Please see Our Message Forum for more information!
Posted by Gina Maisano at 1:46 PM No comments:

Gold is up, that's good - or bad- because if it is up that means there is something wrong with the financial system....
Oil is down, that's bad - or good- because if it is down that means there is something wrong with the financial system.....
Unemployment numbers are not accurate because it is really the Quarterly Earnings that count... or do they? Inflation or deflation, stop the money making printing presses.....
Stocks? Bulls and Bears oh my. Financials are down but will shoot up because they are being subsidised by the government, or not. Tech stocks are sketchy at best and commodities are so so if cap and trade gets capped and traded.
Mark to market... this is worth that today but if you think of what it is worth tomorrow it is worth even more but we have to only count today so everything you own is devalued....
Cafe standards, car Czars, TARP, Son of TARP, bad loans, good loans, fannie loves freddie.....
Bailout Nation lives.

One thing I do know. We won't fix the economy by messing with health care. Thinking of putting yet another line in the pond? Please keep out of the Health Care system. We have enough problems. The same folks who are in charge of the financial system would be in charge of our health care decisions. Think about it!

The UK is great. God Save the Queen. I am an Anglo-phile if there ever was one. Yes, I have tea on my Royal Doulton with the handpainted periwinkles.... but I don't want their health care system, thank you. Women who have HER2+ breast cancer that metastasizes can not get life saving Herceptin or Tykerb. They could live for years if they allowed it. But the British health system says, No. So they either have to find the money to get it elsewhere or die.
In Canada, if your province doesn't have a reconstructive surgeon your choices post mastectomy are limited.

Do we really want to follow the health care model of the UK and Canada? And do they really believe that if we do it will save the economy?

I am an American. I am a proud American. Americans get a bad rap. Just like the New York Yankees. Why? Because we have a big payroll and the best players. So lots of other teams hate the Yankees. When the Yanks are in a slump people love to gloat. But they are still the Yankees and when they are having bad season you won't ever see Derek Jeter get up and give a speech apologizing to all the other teams because the Yankees are legendary, will always be the super power in baseball, and will always find a way to win the pennant.

It's time for everyone to slow down. Let's put our priorities in order. Let's fix what's broken. If it can't be broken then get rid of it. Let us let the people who know what they are doing make the decisions. And let's get ready for a fight.

Because whether you are a democrat or republican or independent or green party or socialist - believe THIS:
YOU DO NOT WANT THE GOVERNMENT TO MAKE YOUR HEALTH CARE DECISIONS FOR YOU.

Pay attention. Things are happening very fast and we could lose everything.
We have cancer. We cannot afford it.
Posted by Gina Maisano at 10:33 AM 1 comment:

The Non-Profit Community Can Breathe Again

President Obama, I know you are working hard to get the economy running again, but this idea would really hurt those of us in the not-for-profit community....

April 2 (Bloomberg) -- The U.S. Senate rejected a proposal by President Barack Obama to finance an overhaul of the nation’s health-care system by limiting the ability of the well-to-do to take tax deductions for charitable contributions.

The chamber unanimously approved an amendment to a pending budget plan that rejects the proposal to limit the size of itemized deductions that can be taken by those earning more than $250,000.

Obama proposed using the estimated $318 billion such a change would generate to help finance a health-care overhaul, which he says will cost at least $630 billion. Lawmakers said they feared the effect of such a tax change on charities.

“The Senate sent a clear message to the president,” said Senator Bob Bennett, a Utah Republican who sponsored the amendment. “Charities benefit greatly from the donations made by individuals in this income bracket, and raising taxes on these contributions would be a disservice to Americans and the millions of charities across the country.”

To contact the reporters on this story: Brian Faler in Washington at bfaler@bloomberg.net


Posted by Gina Maisano at 7:14 PM No comments: